YOURURL.com Two weeks ago, I blogged about the short term practice of mailing children in the beginning of the twentieth century.  In that post, I mentioned that I had done a magazine article on the early mail system.

ritonavir tablet in hindi Since I’m making my way across the country for a book signing this week, I thought it would be a good time to post that article.  I’d love to hear if any of you have ever actually seen one of these land arrows that are almost 100 years old and an important part of our U.S. Mail history.

Each day when we collect our mail, most of us don’t stop to consider that just 150 years ago, mail in this country was being delivered by The Pony Express.  Although this form of delivery only lasted for 18 short months until the transcontinental telegraph made it obsolete, it was the beginning of our formal mail delivery system.

Fast forward from 1861 to 1918 when the United States Congress appropriated $100,000 to establish an experimental air mail route from Washington D. C. to New York, New York.

The experimental route was so successful, that soon the Post Office Department began making plans to establish a transcontinental route from New York City to San Francisco.  This original transcontinental air mail route in 1920 was 2629 miles long.  With the planes flying an average speed of 104 miles per hour, it took 25 hours and 16 minutes of flying time. 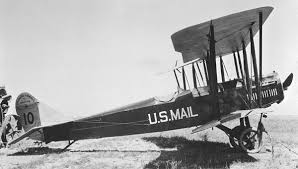 Navigation systems were not well developed at the time, and there was no radio guidance or radar so it was common for air mail pilots to lose their way and get lost, sometimes with deadly consequences.  Pilots needed help especially when flying in the dark or in bad weather conditions, so in 1924 our federal government funded a project to build land arrows and beacon towers tracing the air mail routes and lighting the way from state to state and coast to coast. 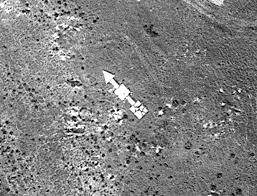 These enormous, concrete arrows were 50 – 70 feet long and pointed west.  They stretched all the way across our country and were spaced roughly 10 miles apart and were painted a bright yellow to be easily visible from a distance of 10 miles or more.  Each arrow pointed the way to the next arrow in the route. 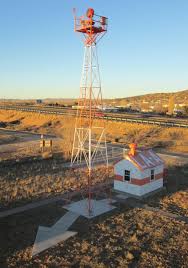 In the center of each land arrow was a 50 foot tall steel tower with a rotating gas or electric powered light.  A small shed was built on the tail of the arrow to house the generator and to give the keeper a place to rest.  All of these beacons were given a number which was painted on top of the generator shed.

In all, 700 land arrows were built in the 1920’s as part of the world’s first ground-based civilian navigation system to aid the air mail pilots in their cross country flights.  Later, the same arrows were used as navigation aids by pilots of early commercial passenger flights.

Map of the land arrow route

By the 1930’s, advances in radio technology made this ground navigation system obsolete.  Most of the towers were eventually torn down and the steel recycled for the war effort in WW II.  The land arrows were never formally removed, however most of them were destroyed by urban development.

Today, almost a century later some of the land arrows can be found in the Utah, Nevada and New Mexico desert, seemingly in the middle of nowhere.  Others are sprinkled around the country in fields or yards and have been hidden by vegetation.  The beacons and the towers were torn down, but some of the arrows still exist as a reminder of an earlier time and to point the way.

2 thoughts on “Ever Heard Of A Land Arrow?”